They say tools are a workman’s toy. I say they’re pretty much on point. Workmen are usually extremely creative people – you give them a few toys, and they’ll come up with a bunch of different things to use them for and build stuff. One of the most versatile tools available nowadays is the high-lift jack, also known as the farm jack. But the high-lift jack isn’t popular just among farmers and workmen, but extreme off-roaders too. It is typically used to help off-roaders change a flat tyre, or help them get out of a sticky situation.

Just like any other tool, a farm jack has its advantages and disadvantages. For the most part, off-roaders believe that the pros of the farm jack far outweigh its cons, which makes it one of the most commonly used 4×4 recovery tools. However, as aforementioned, it’s one of the most versatile tools, so it can be used for a wide range of applications. Its purpose, though, is quite simple – to lift heavy objects, like entire off-road vehicles for instance, or even heavy equipment in a warehouse facility. It is the more affordable, mechanical alternative to a winch. 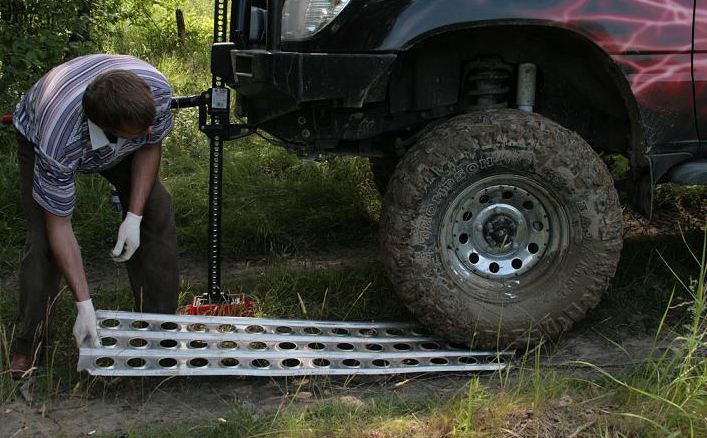 You’ll come across a wide range of high-lift jack models, but most of them are quite similar in terms of how they work and what they’re made of. A high-lift jack will usually feature a long handle with grooves, a movable rack that’s placed over the handle which can move up and down its length, and you can fixate it to the desired position with the groove. The produced torque when moving the rack is very high, and it can lift even extremely heavy vehicles.

However, since high-lift jacks are mechanical tools, they should be used with a lot of precaution. Even though they’re small in size, compared to the hydraulic machines and winches that are used for the same purpose, you’re still lifting potentially tons of weight with them. That being said, if you aren’t careful, injuries and accidents will happen. An experienced mechanic or engineer who has used a high-lift jack many times will know how to make the most out of it, while those who haven’t, should just follow the safety steps.

The safety steps include having the jack stand on a secure, even ground. If you don’t have the luxury of being on an even ground, you can get a platform that’s specially designed for high-lift jacks. Additionally, the ground should be firm and not soft, so that the weight of the vehicle is evenly distributed on it.