Outdoor sirens are oftentimes overlooked in favour of silent alarm systems. People often forget that the point of an alarm is to make a big fuss out of an emergency. And there’s probably no better way to do that than with loud noises and illuminating flashes. A common place where sirens can be seen are emergency service vehicles such as fire trucks, police cars and ambulances. But there are many other places where the use of a siren alarm is more than needed; it can save many lives in case of a natural catastrophe or a hazard at a workplace. Let’s look at some applications of a siren alarm. 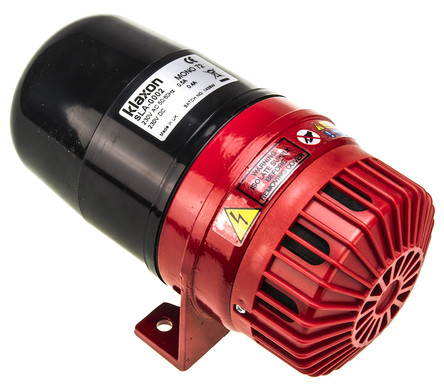 These are crucial to alert traffic and pedestrians that fire trucks are being mobilized. A siren alarm of this kind contains an integrated light system in addition to the loud noise it produces in order to increase awareness and make firefighting equipment deployment more efficient and safe.

These are also known as air-raid or tornado sirens, used to warn the population of an approaching danger. At first they were used to warn about air raids in World War II, but later were adapted to warn about nuclear attacks and destructive weather patterns like tornadoes.

There are many types of siren alarms and each one of them has it’s specific purpose and excels in one way or another. Let’s take a look at some models and discuss their capabilities and specifications.

This is a powerful motor driven siren with a very high sound output. It’s designed specifically for surface mounting and has a separate mounting bracket which can secure it in a position to allow for an easy installation. It comes pre-wired with 1 meter of cable and is waterproof. It’s effectiveness is 200-300 meters depending on the environment that it’s used in. It has the option of being 240VAC or 110VAC and has a long life and run time. It’s constructed to be weatherproof when mounted so it can be used for both indoors and outdoors.

The Nexus 110 Sounder/Beacon has a high output and low current consumption that is designed for industrial and fire applications. Connections are made during the initial wiring phase to ensure a faster and a much more reliable installation. The head is fixed by quarter turn fasteners which enable a faster installation and accurate seal compression which make it weatherproof. Its sound output is typically 110 dB.

Continue Reading
You may also like...
Related Topics:siren alarm

Large Flashlights: Which One Is Right For You?
Self-Watering White Planter and Pots: Grow Vegetables, Fruits and Herbs at Home With Ease
To Top